It’s been awhile, but I’m back with a movie review!

Last weekend I went to go to see Hereditary. It was written and directed by Ari Aster, in his feature directorial debut. This film was eerie, disgusting, and captivating. I was really interested in seeing this film after I saw the trailer that was released shortly after the film premiered at the Sundance Film Festival back in January.

Honestly, I didn’t know what to expect based on the trailer it was so bizarre and Alex Wolff of Nickloedeon’s  Naked Brothers Band was in it so I was really unsure of what the outcome of this film could be. However, I love horror movies so I decided to give it a shot. Hereditary has a ton of layers. You really have to pay attention to what the characters say and the signs throughout the film in order for it to all make sense in the end.

In the beginning of the film, Annie Graham’s mother, Ellen has just died. She wears a necklace that bears the symbol of the satanic cult that her mother was/is apart of to the funeral. Annie’s son, Peter has a lukewarm response to the death of grandmother while her daughter, Charlie is who pretty damn weird start drawing sketches of her very dead grandmother in the casket at the funeral. It wasn’t hard to tell something was up at that very point because the people were smiling at the family and when Annie went to speak about her mother she stated that she felt like she was betraying her mother by even talking about her so publicly because she was a private woman with very private rituals. What they don’t know is that Ellen is ultimately the causer of all of the shitty events that transpire days after her death.

The title of the film already lets you know that what happens to this family is due to legacy and a pre-determined fate, which somehow affects Annie’s husband, Steve. Hereditary really digs deep in the weird, satanic cult thing, mental illness, fate, and most importantly discernment. The Grahams’ familial predisposition never allowed them to stand a chance against all of the forces that were put against them before they even existed.

This film was written precisely and fastidiously. I say that because it was able to blend horror, real life trauma and fear. We see that immediately when Annie decides to go to group therapy and dumps all of her family’s baggage onto those poor people. It was a key point in the film because the grieving Annie delves into the horrors of her childhood and shows how deeply damaging her upbringing was. Both her father and brother were considered mentally ill with different psychotic disorders. She even stated that her brother accused his mother of trying to put people into him, which would only end up making sense to viewers at the end of the film. Annie stated that she kept her first child, Peter away from her mother, but she gave (italics) Charlie to her mother. She said that as if she was compelled to do so and in a heart to heart with Charlie she told her that her mother wouldn’t even let her mother feed her as a baby. She wanted to breastfeed Charlie herself, which is weird as fuck.

Annie was already having a mental and emotional tug-o-war within herself due to confused feelings about her mother’s death and then shortly afterwards her daughter, Charlie tragically dies. Charlie’s death is another pivotal moment in the film because it basically starts the ritual and causes a huge divide in the Graham household. Peter was frantically driving Charlie to a hospital because she was having an allergic reaction to a cake she had at a party Annie forced her to go to with her brother. Peter’s initial response to his sister’s death was bizarre behavior that could be easily attributed to shock, but the freak car “accident” that kills Charlie was also the product of a complex sequence of events of her grandmother’s ritual so, yeah. 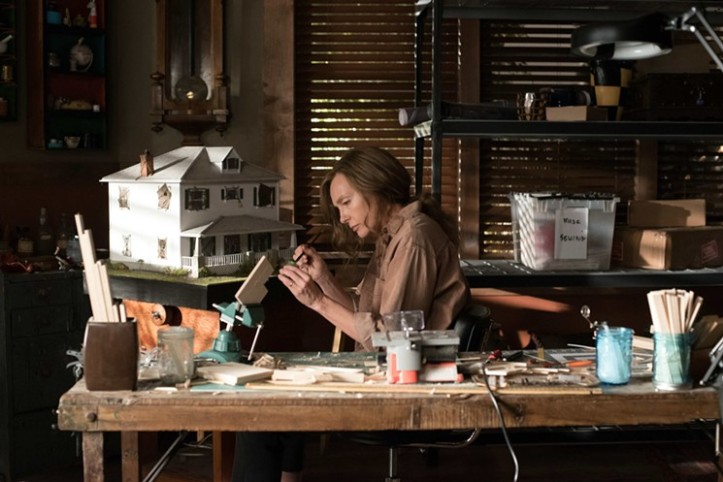 Annie starts to seriously deteriorate from that point on. It was obvious that she was unraveling because it was very apparent in her artwork. I noticed that her character began to lack discernment due to the deaths. She was about to back out of group therapy session, but was approached in the parking lot by a woman named Joan who basically lured her in and got her to participate in a séance. Annie, in desperation and psychologically distress, decides to do one of her own at home. She forces her family to participate so that she can conjure up her deceased daughter. Annie conjured up something but I feel like typically with séances you’re never quite sure. Weird things start to attack Peter whereas his body contorts and he suffers a broken nose in the middle of class. Things got really bad when “Charlie’s” ghost starts drawing in her sketchbook, Peter has a dream that his mother is trying to off him and he even sees visions of his sister. Then, Annie has dreams of confessing to Peter that she never actually wanted to be his mother and tried to terminate the pregnancy.

Annie attempts to put an end to everything and throws her daughter’s sketchbook in the fire, but she catches on fire with it so she realizes she’s somehow tied to it and aborts the mission. Throughout all of this Steve has been keeping a secret from Annie. Her mother’s grave has been desecrated. Annie has been going crazy in the house and conveniently can’t find Joan. She goes through boxes of her mother’s things in her attic and finds out that Joan was/is her mother’s friend all along. Annie also discovers that her mother’s headless corpse has been chilling in their attic along with a lot of blowflies. There’s also that weird symbol carved into the wall above her body. After that there’s a ton of fire, headlessness, nudity and blood.

I think that Hereditary did a really good job with blending horror and real psychological trauma. The real horror wasn’t any of the creepy scenes, but it was the reality of inevitability. There was no way for the Graham family to avoid their fates. This wasn’t one of the films where someone gets away and lives to tell the tale. There was no happy ending for anyone in the film… Well except for the weirdos that were apart of the cult. They completed their ritual and got their king of hell or whatever it was. One seemingly minor thing that came into retrospect was Charlie’s little hobby of beheading dead animals and creating little figures with random pieces of things. She was beheaded during that car accident and the cult created a shrine of her in the same way she created her figures. The creepiest part about this movie is that there is actually some truth to this cult. The symbol that was show in the movie is the “Seal of Paimon” which can be found in a spell book called, The Lesser Key of Solomon. If you want to dig deeper and start googling you’re going to have to do that on your own. I am not doing any extensive research on that (lol).

There were a few things that were unexplained though. The family was oblivious and never really questioned the symbols or words that were written on random parts of their home. I couldn’t come up with a reason as to why Annie’s husband, Steve was burned alive because technically he was not apart of Annie’s familial legacy. He didn’t have any relation to her mother… or maybe he did? But he could’ve simply been a sacrifice The ending goes by really fast so this is one of the movie you want to watch twice to catch all of those hints and hidden meanings again. I think I’ll definitely end up seeing this movie one more time. It was unique addition to the horror it had me on edge and there were no clichés (Thank God)

Check out the trailer below.