I feel like Hulu doesn’t get the recognition it deserves. Most people are subscribers of Netflix, but don’t realize that they’re missing out on all that Hulu has to offer for the same price (or even cheaper for college students). In fact, college students can get the Hulu and Spotify premium for $4.99 a month.

Back to Hulu’s content, I’ve had an account for about 3 years now. Over time it has definitely progressed. I really like that it has current episodes of shows. When I was in college, I was able to catch up on shows like How to Get Away with Murder. They have shows for networks like NBC, ABC, FX, Bravo, HGTV, Freeform, ESPN, Adult Swim and the list literally goes on. I was able to catch up on seasons of shows like Queen Sugar and Atlanta in my down time.

They’ve been on their P’s and Q’s with TV streaming, but I really like the progress that they’ve made with their film selection. In the beginning, their film section was very scanty. There were mostly foreign films that you couldn’t find on Netflix that were pretty good especially the Korean and Danish films. As of late, their film selection is filled with movies that are recent. I was surprised when I saw Fences on there a couple months ago, which is a really great movie by the way. Also, they have some great documentaries as well. I’m not big on Anime, but they do a significant selection.

I’m going to go through the general categories of content that Hulu has to offer and give you a brief overview of some of the gems it has.

Movies (Here’s a few of my favorite films that I’ve watched on Hulu. They vary from American to foreign films.)

The Devil’s Double (2011) is about former combatant Latif Yahia, who returns home to Afghanistan during the early 1990s because he was summoned to the presidential palace by Uday Hussein in order to become his body double. It is loosely based on a true story.

The Truth About Emanuel (2014) is a film about Emanuel, a teenage girl who becomes friends with her neighbor who resembles her late mother. Emanuel becomes wrapped up in an alternate reality that is hard to pull away from because it feeds her longing for a maternal connection.

Confession of Murder (2012) is a South Korean film about Lee Doo-seok, a man who writes a book about the murders he committed 17 years ago once the statute of limitations has expired. Doo-seok goes around repenting his crimes to his victims’ family members. Would someone willingly expose themselves to the public after killing many of their loved ones? Is it possible that he could be an imposter?

Sand Dollars (2015) is a very interesting film about what life is like for an impoverished young woman who lives at a popular vacation destination. The film gives you a glimpse into how those who are struggling to make ends meet find a way to adapt as well as meet the needs of vacationers.

Una Noche (2013) depicts life for Cuban twins who were once attached at the hip. The brother and sister soon start to become distanced when the brother falls in love and decides to embark on a dangerous journey to Miami from his hometown of Havana.

Detroit (2017) is a film that tells the story of a terrifying night in a Detroit motel during a time of civil unrest in 1967.

The Lord of the Rings Trilogy – If you know, you know.

The Eric Andre Show (2012-Present?) – Eric Andre hosts his “talk show” with co-star Hannibal Burress. They literally do anything on this show. Don’t watch it with kids around lol

Broad City (2014-Present) – My fav Jew girl duo. Ilana and Abby are two bffs who get into the craziest and funniest situations in NYC.

Atlanta (2016-Present) – Donald Glover’s series about Ern, a college dropout who comes back home to manage his cousin’s rap career.

Deadly Women (2005-Present) – each episode has a theme for deadly women who kill for various reasons. The stories are so interesting. It’s also kind of creepy how the actors look so much like the real person.

Handmaid’s Tale (2017-Present) – based on the book of the same name. This series follows how deeply life changed for people after the American government was overthrown by a theocracy called the Gilead.

Casual (2015-2018) – Sort of Bachelor, Alex is now living with his newly divorced sister, Valerie and his teenage niece, Laura. The sister and brother are trying to figure out what the dating world has to offer for them while trying to raise Laura in the midst of everything.

The Path (2016-2018) – Eddie and his wife are members of a spiritualist movement known as Meyerism. Things change for Eddie when he has a vision that changes his views. Eddie is forced to face the question of whether he can grow Meyerism without becoming a cult leader just as he is expected to advance up the spiritual ladder.

OJ: Made in America (2016) – This five part miniseries tells the tale of modern America. It depicts the saga of race, celebrity, media, violence and the criminal justice system as it ties into the OJ Simpson case back in 1994.

Catfish (2012-Present) – well known MTV series where people seek out help to confirm whether their internet beau is true or faux.

Hoarders (2009-2017) – classic A&E series about people who hoard shit in their homes and have no problem living in the filth and clutter.

Obsessed (2009-2010) – This series gives viewers a glimpse into the lives of people who suffer from severe anxiety disorders.

Intervention (2005-Present) – this is a another classic A&E series about drug abusers who are given an intervention by their loved ones.

Hate Thy Neighbor (2017-Present) – Jamali Maddix travels around the world to interview extremists in an attempt to understand how they think.

60 Days In (2016-Present) – The series follows people who have volunteered to go undercover and spend 60 days in jail. Their goal is obtain information/evidence on the illegal activities that occur within jail that may be missed by correctional officers and surveillance systems.

Black Market with Michael K. Williams (2016-Present) – Williams journeys into the dangerous world of illicit trade. During his journey he comes across drug users, poachers, gun runners and (possible) killers to learn about why crime pays for them. He also explores global black markets, smuggling, and underground fights.

Huang’s World (2016-Present) – Eddie Huang travels around the world to learn about culture, history and to enjoy some food while he’s at it.

Cartoons & Adult Animation (I like to watch cartoons every now and then because hey who doesn’t? The best part is that they have animated shows that have me feeling all nostalgic about my childhood. Also, they have some adult animations that air on networks like Adult Swim and Comedy central.)

Aqua Teen Hunger Force (2000-2015) – A fry, milkshake and a wad of meat are roommates. It doesn’t make sense I know but it’s not supposed to it’s an Adult Swim show.

Rugrats (1991-2004) – A view of the world from the point of view of babies. Tommy, Chuckie, Phil and Lil attempt to take on world and tackle any issues that get in their way.

Hey Arnold! (1996-2004) – My favorite show ever is about Arnold, a fourth grader with a football head. He gets into all sorts of situations and helps his friends solve their problems with best friend Gerald, who acts as a voice of reason, helps him out most of the time.

Dexter’s Laboratory (1996-2003) – A little genius who does experiments in secret lab and is constantly annoyed by his sister’s antics.

Teen Titans GO! (2013-Present) – A hilarious follow up to the original series. The gang gets into all sorts of shenanigans. 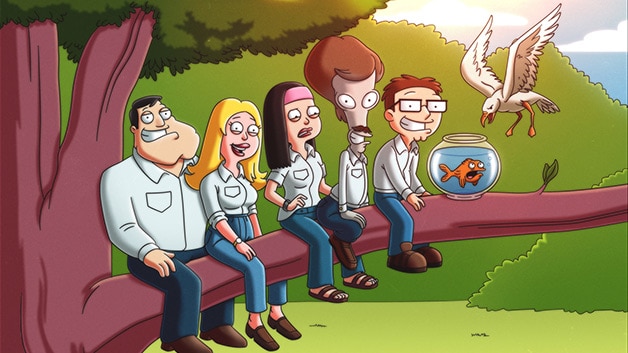 American Dad! (2005-Present) Typical American family that consists of mom, dad, son, an escaped alien and a talking fish as the family pet.

Rick and Morty (2013-Present) – Morty and his inebriated scientist grandpa, Rick get into all sort of shenanigans as they go on adventures across the universe

Mr. Pickles (2014-Present) – Mr. Pickles is a satanic collie that wrecks havoc on his small town as he protects his owner/bff Tommy. However, Mr. Pickles tends to have an evil streak that only Tommy’s grandpa seems to witness

Anime (I’m not really into Anime, but I noticed that they have a decent selection)

Hunter X Hunter (2011-2014) – Gon, a young boy who lives on Whale Island, dreams of becoming a Hunter like his father, who left when Gon was still young.

Akira (1988) is a film set in dystopian Japan in 2019 after the Japanese government dropped an atomic bomb on Tokyo due to an experiment gone wrong. It tells the story of Shōtarō Kaneda, the leader of a local biker gang whose friend, Tetsuo Shima, acquires a telekinetic ability after a motorcycle accident. Kaneda fights to save his friend from a secret government project as he battles anti-government activists, greedy politicians, irresponsible scientists and a powerful military leader until Tetsuo’s supernatural powers suddenly manifest.

Sailor Moon (1992-1997) The magical action-adventures of a teenage girl who learns of her destiny as the legendary warrior Sailor Moon and must band together with the other Sailor Soldiers to defend the Earth and Galaxy.

Naruto (2002-2007) This series follows the story of Naruto Uzumaki, a young ninja who searches for recognition from his peers and the village and also dreams of becoming the Hokage, the leader of his village. His story is told in two parts, the first set in Naruto’s pre-teen years, and the second in his teens.

One Piece (1997-Present) The story follows the adventures of Monkey D. Luffy, a boy whose body gained the properties of rubber after unintentionally eating a Devil Fruit. With his crew of pirates, named the Straw Hat Pirates, Luffy explores the Grand Line in search of the world’s ultimate treasure known as “One Piece” in order to become the next Pirate King.

Attack on Titan (2009-Present) It is set in a world where humanity lives in cities surrounded by enormous walls protecting the humans from gigantic humanoids that are referred to as titans. The titans eat humans seemingly without reason. The story initially centers on Eren Yeager and his childhood friends Mikasa Ackerman and Armin Arlert, who join the military to fight the titans after their hometown is invaded. Eren swears to avenge his mother who was eaten by one. As the story progresses and the truths about the titans are slowly revealed to the reader, the narrative shifts to encompass Historia Reiss, squad leader Levi, Eren’s father Grisha, and others.