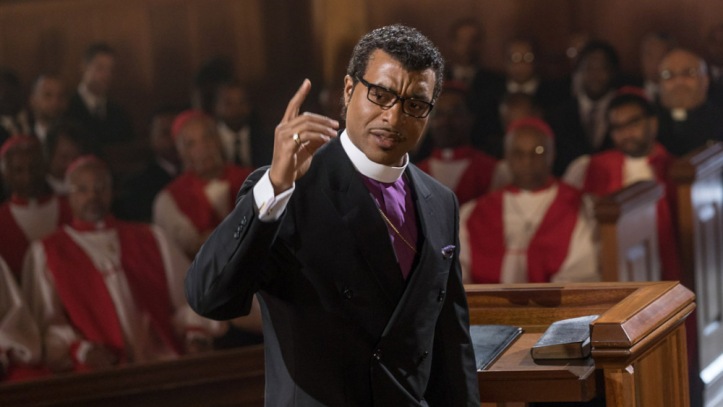 On this lovely Sunday, I decided to watch “Come Sunday.” It stars Chiwetel Ejiofor, Martin Sheen, Condola Rashad, Jason Segel, Danny Glover and Lakeith Stanfield. This thought provoking drama film is based on Carlton Pearson’s excommunication. At one point he was the pastor of the Higher Dimensions Evangelistic Center, which he later named Higher Dimensions Family Church. It was one of the largest churches in Tulsa, Oklahoma.

During the 90’s, the Higher Dimensions Family Church had an overall attendance of over 6,000 people. However, when Pearson declared his belief in universal reconciliation he began to lose influence and followers. His ministry began to crumble. Carlton was ultimately declared a heretic by his peers.

The movie initially started out pretty slow, but eventually it started to resonate with me. The resonating feeling came from Pearson’s questioning and freethinking. His whole life was his faith in God and his belief in being saved so that you can go to heaven. Things changed shortly after he saw a TV program about people in Africa suffering one night, which changed his life forever. I do identify as a Christian, but the culture of it is unsettling for many of the things that transpired in the film.

People believe that questioning God and the things that go on around us is considered threatening, which was why Pearson was excommunicated and his family was ostracized. He introduced a new concept of Christianity. He forced the church community in Tulsa to start thinking about many of the things that they told themselves they weren’t allowed to think about. I think what happens with not only Christianity, but many other religions. People turn their belief and faith into a sort of conditioning/grooming type of belief system whereas they don’t think independently or question anything they just do what is expected of them in the name of their maker. Independent thinking is basically not allowed, which is why people feel like religion gives them a purpose because without it they have no foundation. It gets complicated being a part of a heavily religious community because the moment you say something oppositional you’re out.

The thought of universal reconciliation was just blasphemy to the churchgoers of Higher Dimensions Family Church as well as the church community in Tulsa. Hearing that people who sinned, were gay, committed suicide or were just simply not saved were going to heaven regardless was just not something churchgoers wanted to hear. All their lives they were conditioned to think of Christianity in a binary sense meaning heaven or hell, sinning or not sinning, saved or not saved. They didn’t want to believe that they spent their lives doing right by God just for their pastor to tell them that nobody’s going to hell and maybe perhaps there isn’t a hell. Replacing old faith with new faith is scary. Imagine thinking one way your whole life and internalizing it just for someone to tell you we’re doing something new now. It’s unsettling.

Pearson’s followers were so heavily embedded as well as financially invested into Higher Dimensions Family Church they felt betrayed, lost and angry especially the white people who used the church as a political vessel for racial issues. They felt that because they funded him he owed it to them to convey the message they wanted to hear. Group polarization definitely played a role in the church community’s shifting attitude towards Pearson. They turned on someone they once followed, loved and looked to for guidance. They used their religious ideology as a weapon in order to purge him out.

Much like me, Pearson thought that suffering people who had no knowledge of God and weren’t saved weren’t going to hell. Their ignorance or the fact that they weren’t saved didn’t mean they deserved that. Carlton Pearson couldn’t find the logic in innocent people burning in hellfire just because they weren’t saved. However, his way of thinking was somewhat flawed because one of his young churchgoers, Reggie was gay. Reggie looked to Pearson for guidance, but he didn’t approve of his lifestyle. He told him that there is a difference between doing gay and being gay, which made absolutely no sense to me. Reggie for all intents and purposes had the same logic as Pearson when it came to his sexuality. He didn’t want to believe that he was meant to live a miserable, meaningless life.

Carlton Pearson began to adjust his view of the bible right in front of the Christian community. He was transparent and open with his church as he stood before them expressing his concern about how unrealistic it is to go around the world saving every single person as well as the fact that maybe everyone doesn’t need to be saved in order to go to heaven. It was courageous and daring. His change in belief caused the empire he spent years building to crumble. He was advised to recant and back down from what he said God told him. Pearson was even told that the devil may have been playing tricks on him, but he didn’t budge at all. He tried to reason with his followers and even show them the way, but they all turned their back on him and his family. However, he was able to pick himself up and carry on. Pearson was able to find consolation and continue to preach his love for God, but on a different platform.

What I took away from this film is that in my faith in myself comes before my faith in religion. Even when I’m uncertain or confused. Our belief in ourselves is the foundation for our belief in anything else. We must be able to think independently and not feel ashamed or feel like our love for God or whomever we believe in is lessened because of that.

Overall the movie was pretty good. Initially, I was a little apprehensive, but I found that this is a movie that is thought provoking and will resonate among many young adults who have frayed views on Christianity and their faith in God. It’s one of those movie that seems like it’ll be overly religious, but it’s not. It’s in a religious setting with relatable situations and viewpoints on religion. I would definitely recommend watching this film.